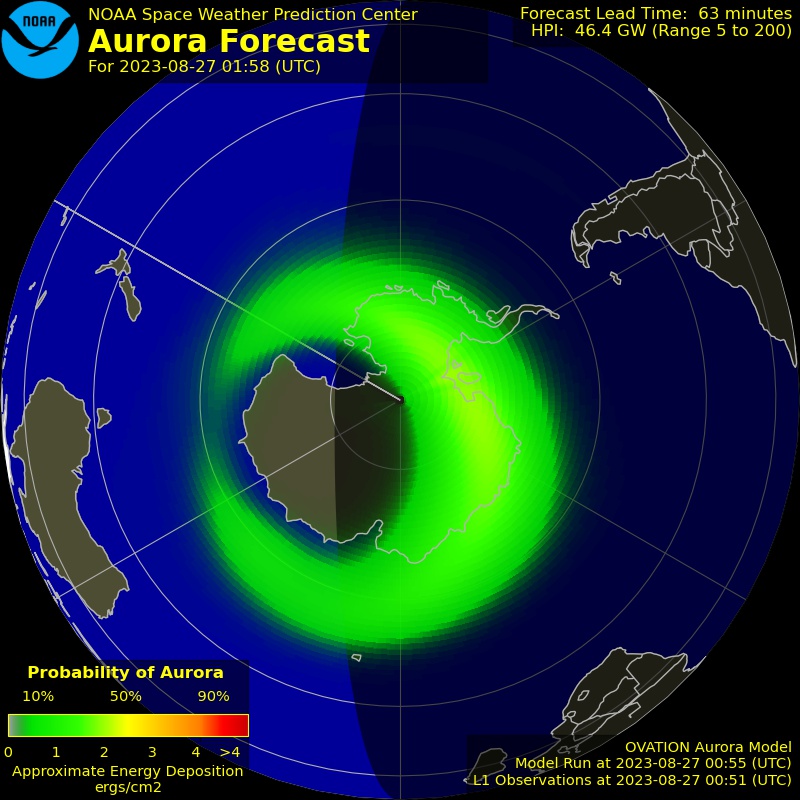 When there is a solar disturbance and the level of the solar wind increases, changes occur in the outer regions of the earth’s atmosphere. The most obvious sign is a visible glow or aurora occurs in the northern or southern skies. This happen because the high energy particles from the Sun follow the magnetic lines of force and enter the Earth’s outer atmosphere in the magnetic polar regions. As these particles travel down they collide with gas molecules in the upper atmosphere and release energy in the form of positive ions and negative electrons. This results in a small amount of light being emitted, in various colours, depending on the levels of oxygen, nitrogen and other elements present. It is this light which causes what are commonly known as the Northern or Southern Lights.

The increase in solar wind from the a solar disturbance not only causes aurora but also has a significant effect on radio propagation, and this is naturally, of interest to amateur and professional radio people. The particles emitted from the sun pass through the outer parts of the ionosphere with little effect, but as the altitude decreases they reach the ionospheric “E” layer. Here, as they start to collide with the gas molecules, greatly increased the levels of ionisation that normally exists in these regions. As a result these regions begin to support ionospheric reflection at much higher radio frequencies than normal and radio communication can be established well into the VHF portion of the radio spectrum, up to a normal maximum of around 430 MHz.

Unfortunately for the HF amateur radio community, many of the plasma particles keep travelling downwards, into the D layer where again, the levels of ionisation are greatly increased. However, increased level ionisation at these altitudes serves to absorb HF radio waves at higher frequencies than normal and because of this increased signal absorption the HF bands can be blacked out altogether.

During the course of a normal auroral event, the polar regions are the first to be affected and so the absorption is often called Polar Cap Absorption (PCA). Usually PCA is confined to latitudes greater than 60°, although during some of the larger events this can extend out from the magnetic poles towards the equator. Signals travelling into or near these regions can experience strange effects and are often completely blocked.

Solar Data from the USA National Oceanic and Atmospheric Administration